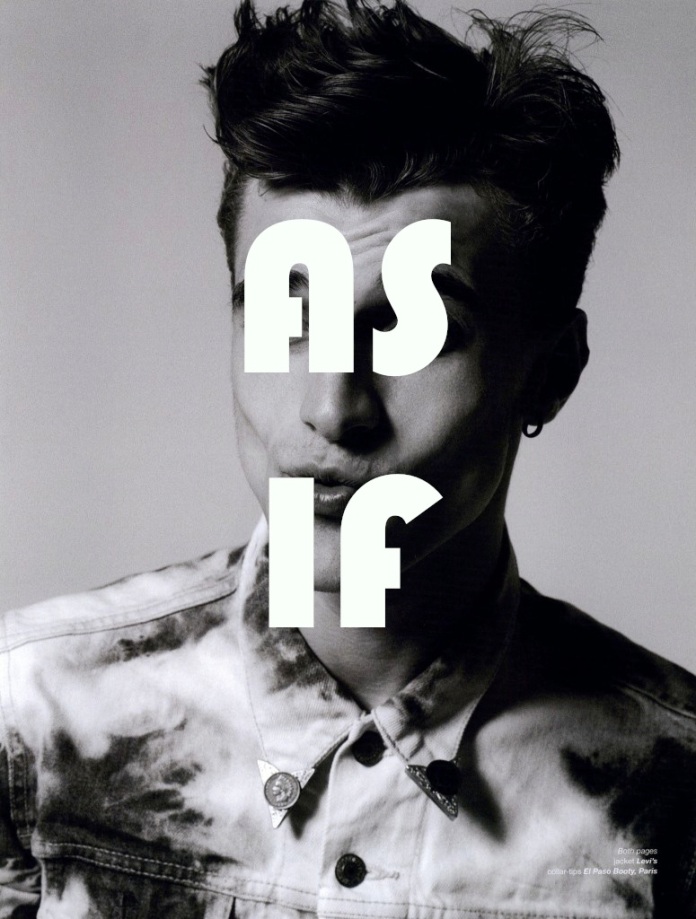 I’m not quite sure how the interaction begins, being that, when alone, I often dial my face in at an uninviting hostile resting position – especially when traveling in a foreign country. This, I believe, ensures that I will not be the subject of my own Taken-esque autobiography, provided I survive to tell about how I lived through a pimp-mandated heroin addiction and enslavement in a black-market prostitution ring (though, let’s be honest, I’m probably too old to even be considered for such abductions). Needless to say, anyone willing to approach me thereby has the brave fortitude of a climber taking to Mount Everest barefoot. Or, you know, they’re just an idiot.

Eva is downstairs handling jewelry-line-business stuff while I’ve been left to my own devices, wandering around the cavernous halls of an accessories trade show. I’ve worked these types of environments before as a model and their general unpleasantness triggers a muscle memory release of anti-endorphins, sucking the life out of me while I walk down the rows of leather goods and hand-beaded belts, past sales reps carrying undercooked stacks of Parisian pizza and looking positively grim. Prince plays out of speakers somewhere. Murder me.

Exhausted from a night spent dancing to the same J. Lo song over and over again, I sit down across from a cafeteria selling the aforementioned pizzas.

I look up at the face of a man in his mid-60s, wearing glasses and tufts of thick white hair.

I have been mistaken for a few things in my day – Russian model, that girl some guy met at Art Basel last December, Julia Stiles – but never Italian. My German and Dutch heritage paints me all the blonde-haired-blue-eyed colors of a Hitler Youth rainbow. Even Northern Italian would be a stretch.

I lie because it’s easier than explaining that my friend has an apartment and I’m officially one of those irresponsible degenerates who can add “lady who lunches” to her impressive list of accomplishments. I’m in Paris for six days doing nearly positively nothing aside from eating, drinking, and seeing friends, which I guess qualifies itself as a vacation.

“Me too!” he starts. “I’m here for shooting. We doing Hermes tomorrow.”

Given his age, I would assume that he was a photographer, or someone that has otherwise given up vanity in favor of an occupation that requires legitimate skill and intelligence. He sits next to me before I can protest and pulls out a Blackberry from 2006. And then he starts showing me photos from all of his “campaigns.”

The Male Model of Antiquity thumbs through photo after photo of him wearing futuristic reading glasses and posing with random young Asian women. It’s nearly the same image every time, with badly Photoshopped advertising copy placed with great aesthetic irreverence. I have no idea what the hell I’m looking at. “Oh!” I want to say. “Glamour shots by Deb? I know those!”

Oddly, at this point his English devolves into indecipherable mumbling, as though learning how to purposefully mistake young women for Italians and then share the fact that you’re an aging male model is as far as he got in his Rosetta Stone: English tutorial. From this point forward, there’s a lot of vigorous head-nodding and fake laughing on my part, while he begins to talk to me in full-blown Italian.

I think he complains about agencies.

I think he tells me he worked for Chanel.

I think he says something about making $15,000 yesterday.

I couldn’t tell you; I have no idea what this guy is talking about, or, for that matter, what he’s doing walking around a jewelry trade show if he’s so fabulous and in-demand.

One of the Prince songs that’s been playing wraps up, and I take the opportunity to shut down this interaction before it goes anywhere weird. Maybe not like prostitution-ring weird, but “Can I a’take you out to dinner weird.”