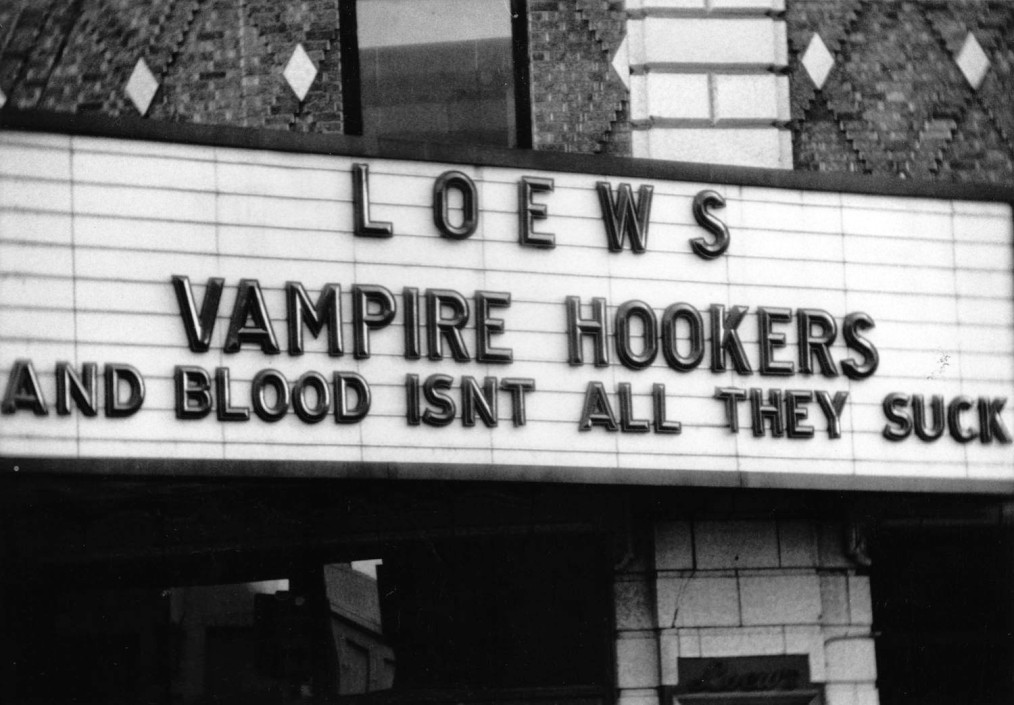 There’s a girl with red lipstick that remembers me from an Oscar-viewing party at our mutual friend David’s house.  March.  Fucking March.  I blurt out something about how depressed I was that day because of my ex-boyfriend even though the story doesn’t make sense because she doesn’t have a context for it and we hardly know each other beyond a brief and ancient exchange about who we thought should win Best Actress.

A man who looks like any other man comes up beside her.  They apparently know each other; he’s her boyfriend’s work partner.  He stands back while she and I talk with his arms folded, a hand to his chin, surveying the scene like a general contractor.  He whispers something to her and then looks back at me.

The girl mentions that he lives in Los Angeles but he says he’s just got a place out there.  “I’m doing the bicoastal thing,” he yells over the terrible music.  She says something about an Alpha Romeo and I try to conjure up an image of what that car looks like in my head because I think that was her point, but I can’t.  He asks me where I live.  I tell him Brooklyn but that I go back and forth between New York and LA because I have family and friends out there, because I work there, too.  I do not need to drive home the point by telling him that I am bicoastal.

And suddenly, without realizing, she’s left the two of us standing next to each other.

I let him buy me a gin and tonic because he’s a douche bag and I deserve it for having to hang out with him.  Michelle orders a shot of tequila.  He gets one, too.  I can’t decide if he’s drunk or stoned, but he keeps asking me the same questions over and over again, not even remembering that he has asked them before when they come out of his mouth or when I give him the same answer.

Where do you live?

So you live in New York?

What do you do here?

I model and write.

How do you know Devon?

I met her through my friend David.

What do you do?

I model and write.

How did you and Devon meet?

Through my friend David.

He keeps standing next to me and looking at me while he shakes his head.  I dance around the table with my gin and tonic sloshing out of my cup because I’m not drinking it quickly enough.

“You’re intimidating,” he tells me.  I say that’s a matter of perception.  He says that he’s insecure and I tell him he’s full of shit because no one that’s insecure would be secure enough to admit that in public to a total stranger.  I think he says that he has low self-esteem and now he’s really just blowing smoke up my ass.

On three occasions we bang our heads together, trying to listen to one another speak.  After the third time, I can’t tell who’s embarrassed or who’s irritated.  Michael stands back and says, “Hi, I’m Michael.  It’s so nice to meet you.”  He’s trying to start over.  He does this twice.  I haven’t felt this awkward since I went on a blind date with some rich kid with a BMW who kept saying over the course of our Moroccan dinner date “Oh my god.  This is like the worst date ever, right?  I mean, I’m sorry.  I’m like.  Fuck.  This is bad, yeah?”

This man makes me want to gouge my eyes out.

When Michelle tries to save me by walking outside to “smoke cigarettes” he says he has cigarettes and that he’ll come with, but by the time we’ve made it through the crowd and out the doors he’s already forgotten he was going to come out with us and so he smokes a cigarette down the sidewalk by himself.  I don’t even think he sees us, he’s that fucked up.

When we get back inside he finds me and grabs me by the arm and says, “Where did you go?”  Every time I get out of his line of sight he comes and finds me and asks me the same question.  Whenever I make my way to get away from him he asks me if I’m leaving, my response always being “I’m going to say hi to a friend” or “I’m going to the bathroom,” when it should really be “You’re not my psycho boyfriend, psycho.”

His breath is a steaming cloud of cigarettes, the kind where I just want to get a tongue scraper and peel the tar off of his tongue from front to back.  I knew this breath, had kissed this breath before.  It was a combination of Camel Lights and cocaine, which, as my friend Jared later tells me, Michael was apparently doing in the bathroom that night.

He’s a terrible drunk, just as bad as a friend of mine from Los Angeles, back when he used accuse me of being a star fucking prostitute just because I didn’t want to give him a ride home.

When he asks for my phone number I give it to him but I have no idea why.  In a way, I feel bad for him, even though his “I’m so shy and awkward” shtick is a total load of crap.

I nod my head because if I’m lucky he’s not going to remember me tomorrow and none of this will matter.  He’ll just be drunk and high in another bar, hitting on another girl who he’ll use his extreme self-deprecation as a ploy to get her to sleep with him.