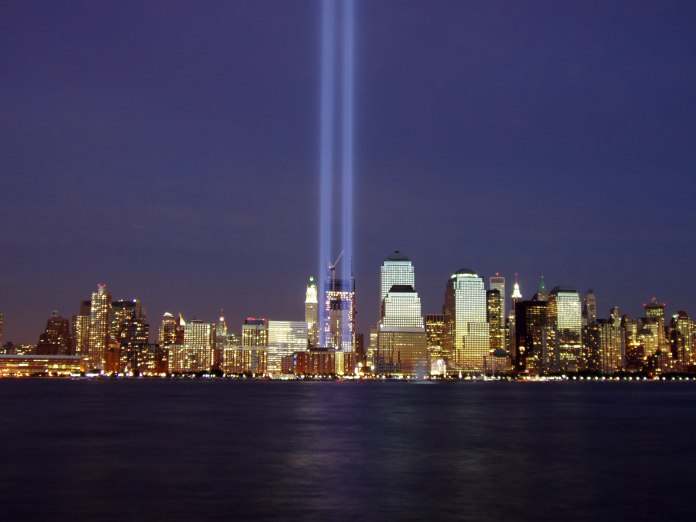 Things feel different.  Things have felt different for the last ten years.  When I watch movies, I can tell if they were made before or after the attacks.  I watch films from the late 90s and can see a childlike naiveté in the eyes of the actors, in the written content, even in the way the light fills the screen.  Music: that changed, too.  What once lived in the forefront of everyone’s minds has lived on, evident in pop culture, tucked away in the back of our collective minds, grating against our subconscious.  A pervasive sense of unease, covered up with the notion that life must continue.  Like when a parent dies or you lose a limb or experience some tragedy from which you are certain you will never recover.

That California morning ten years ago, I wake up to the phone by my bed ringing.  It’s my mom.  She’s at the LAX on her way to Logan International, about to board a plane to Boston.  “Jenny, would you check the news?” she asks.  “I think a bomb just went off in the World Trade Center.”  I’m groggy and tired and it’s not even 6 in the morning and I’d rather be sleeping.

She tells me to check the TV.  I don’t want to because I think my mom is just being my mom and overreacting.  I pad along the tile floor with the phone held up to my ear until I get to the front of the house and turn on the giant projector television.

CNN.  Talking heads.  Confused eyewitnesses.  A giant building being swallowed in charcoal smoke.  I’m on the phone with my mom.

“It was plane,” I say, and as I am talking to her something flies across the screen of my television and into the south tower.  No one says anything.

Watching a plane fly into a building – on the news, in real time – as it came in and connected with gray metal, as the reporters who blinked still didn’t know what had happened, watching from across the country as the plane hits and no one says “Another plane just crashed into the building” until four minutes later and you’re only left thinking, “Did I just see a plane crash into a building?” because you can’t believe what you’ve seen.  It’s too gruesome, too absurd.  Watching that plane.  That changed me.  I can’t say how.  I can’t say what I would be like today if I had never seen that.  But I know that I am different.  Sitting in front of my television, watching the news, footage playing back over and over and over again.  I am changed.

“Let’s look at that again.”

“Here you see the plane…”

And I can’t turn away because I don’t know what is going to happen next.  I can’t turn my television off but I can’t shake the overwhelming wave of nausea hitting me each time I watch the plane come in from the right, too fast and too big, disappear, and explode.  Boom.  That was a plane.  Hitting a building.  My brain attempts to process it, because I’m not watching fucking Die Hard; this is real life.

At some point, I get dressed for school.  I listen to the news.  People are talking about terrorist attacks.  The president makes an address.  I sit back in front of the TV and watch as the smoke churns through the September sky with a feverish aggression, thick and toxic.  Glass ruptures from the windows, falling like glitter, catching light on its way down.  Papers float like wayward birds.  Someone says that they think people are jumping from the building.  The smoke gets lower.  Fire licks at the edges of black holes like the burn at the end of a newly lit cigarette.

A reporter says something about the Pentagon.  They cut to pictures of Washington.  More smoke over European-looking rooftops.  A reporter says that the FAA has grounded all planes.  My mom is not going anywhere.  They’re shutting down New York City.  No one is going anywhere there, either.

Just a week before, I was in LA on my way to the airport to meet my mom in New York to visit for the first time.  “When you go to New York,” my driver said, “you have to see the Twin Towers.  You’ve never seen anything like it.”  And later, on a tourist boat to the Statue of Liberty, my mom pointed to two buildings so absurdly tall and out of place that when she said, “I think those are the Twin Towers,” I assured her that they were not.  “I think those are in New Jersey,” I told her, convinced that they had to be closer to us and not on the island.  Two monsters.  Two giant, impossible things.

On TV, one of the buildings turns into a pillar of smoke, disappearing like a magic trick.  Poof, and it’s gone.  An unfortunate accordion.  Like lighting a match.  Letting it burn.  Watching flames scorch the wood and the wood curl around itself until nothing is left but an emaciated bit of ash.

Dust consumes lower Manhattan, morning light reflecting off of it like a heavenly fog.  Eventually, the next building falls, caves in on itself layer by layer by layer.  Collapsing.  Imploding.  The building falls like a house of cards.  Queens and Kings, blacks and reds, everything in one big heap.

The building falls like it does during those controlled explosions in Las Vegas when they’re tired of the old hotels, when they want to build something that will make more money by filling it up with more expensive people, carting away the rubble and replacing it with something beautiful and shiny with large pools featuring Disney music and water tricks.

Ten years later, we are still rebuilding, though what has been put in its place – not the memorial or the next World Trade Center, but the wholly intangible, the collective psyche of this nation – is of a substance stronger than steel, more immovable than stone.  And in another ten years, it will be much the same.