While waiting the four hours in between the flight I just got off of (7 hours and 20 minutes of hip-aching, sleeping-aid-induced “rest”) and the flight that I am yet to grin and bare (5 hours and 25 minutes of lucid aversion to humanity), I get a text message from a friend who claims to be jealous of my around-the-world jet-setting lifestyle.  This is after we exchange our favorite French words – his is a phrase to tell someone they have a booger in their nose; mine is “Banoffee” which is a fictitious word French Starbucks uses to call their delicious looking banana-coffee tart trapped behind a fingerprint smudged window.

Another text message comes in, this in response to my apology that I did not go to their showcase in LA.  I respond something to the effect of “Very sorry.  Was in Paris.  Moved to NY.  Hope it went well!”  He comes back with, “Must be rough.”

The only flight I have ever had that defied all conventional opinion about what flying is (crap food if there is food, recycled air, subsequent illness, coughing, sneezing, wheezing fat people spilling over into your seat, etc) was last year when by the grace of God I was able to upgrade my flight to London to First Class.  Holy shit.  Now, that’s living.  I couldn’t go ten minutes without a gentleman in a crisp blazer addressing me by “Miss Bahn” and asking if I would care to have my wine glass refilled.  It has since become a goal of mine to make this extravagance a mandatory in my future life of assumed awesomeness.

The rest, my friends, is steerage.

There’s nothing glamorous or envy inducing about flying for so many consecutive hours that you begin to feel your jeans tighten around your legs that are getting progressively more swollen from lack of proper oxygen and blood flow.  Currently, I am experiencing a tingling sensation in both legs that I would normally attribute to “dead leg” but am more concerned that it might just be that I am undergoing massive blood clotting.

Similarly, being crammed in between a window and a French man who is enjoying every morsel of his freeze dried plane food while you are nearly on the verge of peeing your pants, is not what I would call my idea of a swinging good time.  I had to pinch the inside of my fingers while he debated between eating his table crackers or ginger snap cookies just to keep the flood at bay.

I don’t know what it is about Business and First Class, but each and every time I pass through them on the poor girl’s walk of shame, I note how sedated and calm they are.  They don’t chatter obnoxiously or hover down the contents of a greasy McDonalds bag, filling the air with the potent stench of gristle and burnt vegetable oil.  Most wear button ups.  Most are quiet.  There is no mad shuffle or fighting for luggage space.  These people are human.  These are the people I want to be sitting next to.  Maybe – just maybe – rich people are better than us.

On the next leg of my flight, I am sitting near the rear of the plane but for some reason had a ticket with a better boarding group.  Oh, I remember.  I got here four hours before anyone else.  Anyway.  By the time I’m seated and scribbling in my notebook, the remaining passengers with seats in my general vicinity are already being told that there is no room left for roller bags in the overhead bins.  The uproar begins.

Grown adults race back and forth up and down the isles trying to find a place for their precious cargo, trying to beat someone to some extra space that has somehow gone undiscovered.  I sit in my seat and nurse my rising blood pressure as everyone’s voices get really strangled and high pitched.

The woman next to me, who has used the overhead bin to store her jacket and a Gucci purse that could easily be put near her feet, starts getting all Jerry Springer on this woman who has vocalized her self-diagnosed “bag anxiety” and has begun to shift items around to “make maximum use of limited space.”

She wags her fingers and I catch the flash of a wedding ring and I feel extremely sorry for whoever has to live with that day in and day out.

Bag Anxiety woman begins her rebuttal and the most agreeable flight attendant in the air comes over to mediate and move the bag himself with his own hands, which Gucci Bitch has to tolerate for legal reasons I have never fully researched but supposedly talking back to flight attendants is a no-no and results in getting to your destination not at your scheduled arrival time.

The commotion eventually winds down but I’m stuck listening to Gucci Bitch describe to the woman next to her that she’s in PR and spouting out justifications for why she is right and why Bag Anxiety is wrong.  Thank God, I’m not in PR.  Thank God I’m not in PR and I’m not this woman’s husband.  Being in her presence for more than ten minutes is giving me an ulcer.

Back to the glamour.

After a recession caused flight sabbatical in 2009, I realized that for some strange reason, I wasn’t sick all of the time.  It only took me a few hours of thoughtful brain racking to realize that the snot constantly running down my nose and the low-grade sore throats I had learned to live with were most definitely a result of everyone else’s germs flying through recycled air, swishing around the plane, venturing up my nose, and launching a relentless campaign against my health.  Whenever I hear a cough or a sneeze now, I hold my breath.  I do not enjoy being a coinsurer of disease – Strep Throat from Oklahoma, H1H1 from Michigan, Plague from Beirut.  Pass, pass, and pass.

Aside from being a bitch, Gucci Bitch is also a disease carrier.  She hacks and coughs and blows her nose throughout the flight and when she pulls out a tidy little bottle of hand sanitizer I want to ask her if she’ll do me a favor and pass it my way so I can suds down the inside of my lungs and nostrils for good measure.

Now, I’m here.  Thirty-six thousand feet above the real world on hour twenty of my chic little trip to Paris, where the most I was able to see of the city was the inside of the Park Hyatt and two singular glances at the Eiffel Tower, eating at Le Pain Quotidiene most nights and noshing on a generally disgusting combination of snacks I purchased from the market (the highlight being scooping some lentil salad out of a jar with whole wheat crackers, finished by grapes I washed off in the bathroom sink and dried off with a Kleenex.  Jealous now? 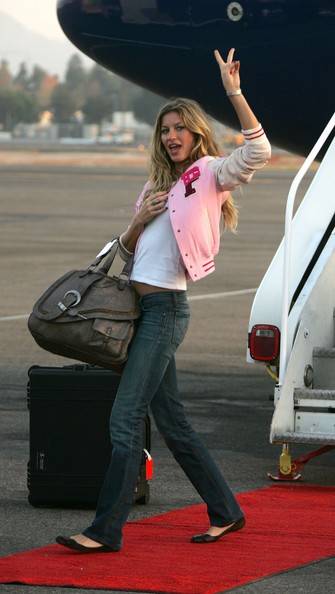